I was, with respect (as they say), very disappointed to read this recent tail docking monologue. OK, Prof Mellor accepts that there is no behavioural substitute for a dog-mounted tail, that tail docking is likely to result in chronic inflammatory pain and chronic neuroma pain..., but, he contests, that a puppy up to a few days old is incapable of feeling pain because they lack consciousness. He says that this is what the "science says", but I am sorry, but I think the science says no such thing.  I think the most straightforward uncontestable fact is that we don’t know, and maybe that we can’t possibly know.

So what evidence does Prof Mellor present in this paper, to assuage us of the idea that neonates feel pain.  Well, this is a little embarrassing, because the paper is quite difficult to read from a critical perspective, it is written in many ways like a blog.  Whilst it includes about 25 self-citations these are kind of mostly references to the fact that he has argued previously that puppies don’t feel pain (or that different species attain consciousness at different times).
At one point there is a line with 8 references followed by several sentences of the main argument (that puppies don’t have consciousness for several days)... but few specific facts in this section have their own citation! I am embarrassed to say this of someone so eminent, really, but that is no way to write a scientific paper. We want, in the main body, fact citation, fact citation et seq.
I made the effort to try and track down those 8 references.  Most are simply self-citations of reviews. Not good enough. Mark = D- (not a U/E... because there was an attempt to use referencing). Whilst most are reviews, others were original scientific papers.  These were 1967 EEG papers showing that neonates have far less complex EEG than more developed puppies. Largely in the sleep state.  In fact, they DO SHOW that the EEG changes on nociceptive stimulus, but not as much as the adult.  It would be over-reaching to therefore state that they feel less pain (because we do not know categorically with old studies like that what the actual markers of pain would be except.. different to no pain), but that would be the most you could possibly say, from that data.  So cutting a puppy’s tail off would be, what 25% as painful as cutting an adult leg off? 15%? 30%? Still sounds pretty painful. 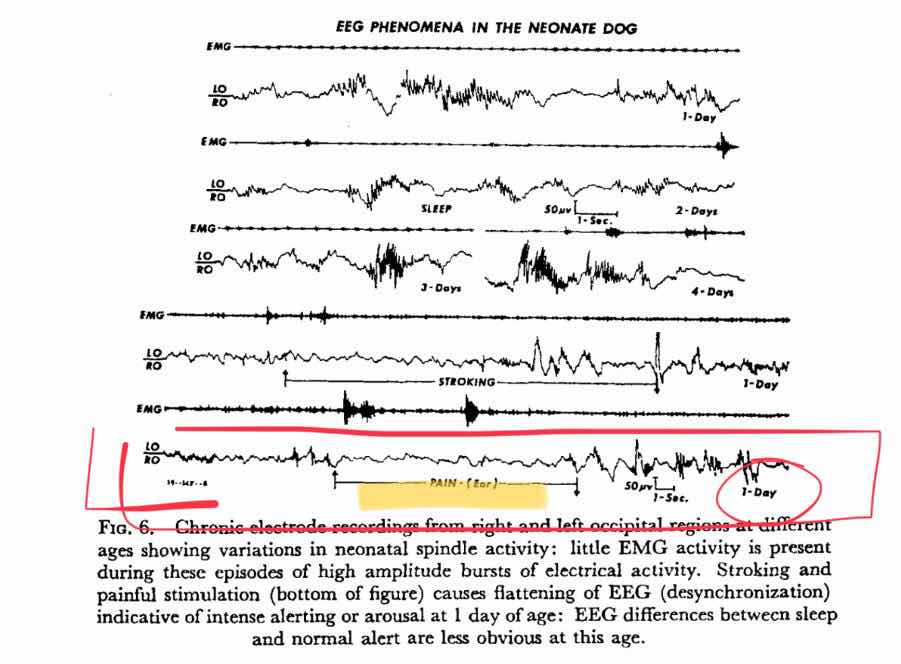 The main body does two things; one half attests that the reason we think they do feel pain is by ill-founded analogy with other species, and then... the other half rebuts this with, largely, analogy with rats.
Unless you are prepared to read all the previous REVIEWS I didn’t feel there was any useful new information in this one paper. The basic mantra is: They don’t have consciousness, as evidenced by the fact that I have previously stated that they don’t have consciousness.
So there’s a quoted paper (much more specific) showing the average yelps during the procedure is about 20.  Feeble-minded sorts like myself may assume that this is because it hurts, but of course the old argument is used that this a subcortical behaviour to signal the need for assistance from the mum. Clearly, as stated in this piece, nociceptive (pain) signal has traversed to the spinal cord and up to the sub-cortical yelp centres [partly agree], but it doesn’t reach the cortex because ...because he says so on the basis of previous reviews.  Why “partly” agree above?  Because studies have not even successfully located where the yelp centre is and how it is controlled even in adult dogs.  Big damage to pretty much any part of the cortex can suppress this “reflex” (reference: I say so - gosh isn’t academic writing easy once you can just quote yourself).
So can I prove that puppies feel pain? Nope. I cite Occam's Razor (“the starting hypothesis should be the simplest”).  Now, this creates a problem.  If you really are deeply religious in a literal and creationist way you believe that man was created, then woman then animals. OR was it the other way around (Sunday School quite a while ago)? Anyway, they were created separately. Animals are sort of machines created for our entertainment.  So Occam's Razor could be that only humans feel pain.  In fact, I think some people believe that only they themselves feel pain!  ...my standpoint is that of evolution as a proven fact.  In that case, I would say that Occam's Razor is that all those responses that look the same are the same.  And you need an experiment to disprove it.  What experiment could you do? ...well it is tricky!! ...Maybe we should think about FRMI or something at least... are there cortical changes in the cortex of a puppy with pain... but even that means that we feel we really know where consciousness lies and we are not that sure.....  and anyway, those 1967 papers already showed that there is a cortical change on painful stimulus in a puppy.  So why would anyone be soooo desperate to dock a puppy that they would need to do those type of experiments just to shed light on whether the well recognised screaming really represents pain or not.... when we already no about the chronic pain, the neuroma and the tail’s central role in canine behaviour?