Please Don't Wake Me Up Before You Go-Go

Just before Christmas @CVSControl portentiously tweeted a link showing that there is a spike in cardiovascular deaths over the Christmas period. One hypothesis was that people are dying of elevated emotional stress and that Christmas is an awfully stressful time for many. #Families. Come Christmas itself there was then a cluster of high profile deaths; Carrie Fisher and George Michael sadly died and initial reports (by the popular media) suggested that heart disease was involved. Then finally, in apparent response to the stress of the untimely death of her daughter, Debbie Reynolds too died of a cardiovascular event (stroke).  Now here are my questions: Firstly, is it even true that people die of sudden stress or what might be called “emotional shock”?  Secondly, if that is the case would there even be anything scientists could do about it anyway!!?  OK, spoiler alert: (1) Answer: Yes. (2) Answer: Probably, in the future.
Longer version.
1. Does acute emotional shock/stress kill? 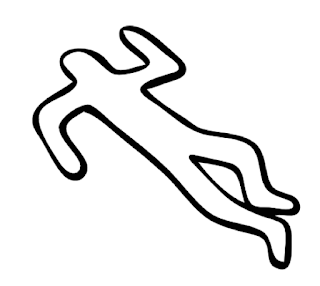 Now the Cardiovascular control Twitter Feed @CVSControl includes in its Bio: “Our live[s are] in the hands of the next rascal who chooses to annoy [us]”.  Sure enough, this phrase was written by Dr John Hunter (1728-1793) who subsequently, it is said, dropped dead of a heart attack during a particularly acrimonious University Staff meeting.

…but, in fact, you will find the true dangers of getting cross or over-excited are not terribly well established. That said, we do know a fair amount about how the stress response (emotional shock) increases heart rate and blood pressure: What happens is that the brains of most animals from mice to people or dogs are wired to detect threats and send a burst of nerve (so called “sympathetic nerve”) and hormone activity to all those parts of the body involved with fighting or flight (aka escaping).  That’s great if you do need to fight or flight, but is it dangerous when this happens at other times?  You see the vast majority of people that die of heart disease actually have high blood pressure and atherosclerosis etc. Essentially they have their coronary arteries all furred up. In research terms, I don’t have the figures, but I am confident that the vast majority of cardiovascular research funding goes towards investigation of heart and blood vessels themselves, not their control. This perpetuates a myth that cardiovascular disease is all about those very hearts and blood vessels. So back to the question; does a sudden shock lead to cardiovascular deaths?
Well there are lots of bits and pieces of data that suggest this is the case. For example there are spikes of heart related deaths during big football matches: 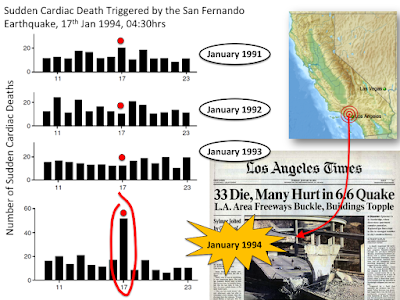 And yes Anger too; see (below) how many more people die shortly after bursts of rage: 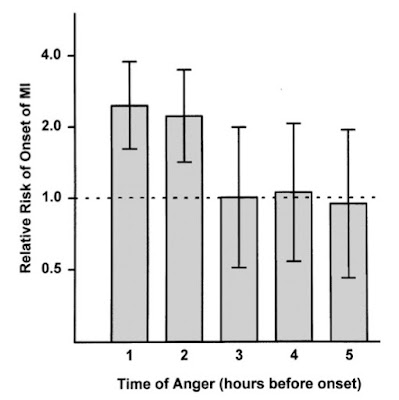 And even just the shock of getting up in the morning is deadly:

...and now it would seem, Christmas is also a cause of sudden cardiac death!
Since, however, most of these sudden cardiac death victims have other types of cardiovascular disease too, believe it or not; this hypothesis is still not widely accepted. It will probably be impossible to ever prove it for sure, but I believe that the balance of evidence confirms that emotional stress can kill.

2. Could the acute stress/shock cardiovascular response be prevented?


Well, naturally that is something I, and a few other people are keen to explore.  Essentially, we think that if we can identify the exact nerves that cause sudden bursts of heart rate and increases of blood pressure we may be able to control them.  This might require a genetic approach.  Currently this is not possible, but it is coming.  Methods are on the horizon for making specific genetic alterations to specific nerves so we could literally turn them on and off.  Google “DREADDs” if you are interested, that is the name of one of the technologies!  (It kind of needs renaming though doesn’t it, because many people are already in “dread” of technology! ) So it's a tough ask, but this is the direction we are going. Hurdles: (i) finding the nerves involved, (ii) devising a genetic manipulation that allows limiting their function, without stopping them from working entirely i.e., if you are actually having a fight or making flight from a real threat! Finally, (iii) …eerm… the small matter of deploying these genetic manipulations in real people and other vulnerable animals. I think we can do it; but I have no idea of the timeframe. I expect it will be within my lifetime; unless of course, my own life is prematurely ended by some rascal that chooses to annoy me :-)