So are we to take it that this is not a happy dog, since he wags here to the left?

(This blog was put on the University of Liverpool Viewpoint Website and is reproduced here just for my own personal diary)
The media and social media have been alive today with the latest revelations of complexity in canine caudal oscillations: “Tail wags”.  The bottom line of Prof Angelo Quaranta’s latest research is simply that dogs can read other dogs’ tail wags for emotional features such as happiness and nervousness.  The claim that dogs wag their tails more to the right than left when they are happy was reported years ago by the same group.  To pick holes in the research would be too easy; for example the authors imply that stress results in elevated heart rates (which it does), but that that “happiness” does not.  That is pretty unlikely, we did a number of student projects years ago measuring heart rates from horses and dogs and found, unsurprisingly that stimuli you would think would excite them increase heart rate considerably.  A race horse for example pumps up its heart rate to near full race speed just at the thought of the race, well before it actually starts racing.  So do I dispute the findings? No not at all, but I think the real interest is far deeper.  It relates to whether non-humans experience emotions at all; that is the central issue and it is a regular battle ground for those debating animal welfare.

The common scientific opinion for centuries has been that only humans experience emotions.  Occam's razor (the simplest hypothesis should be assumed true) has been taken to mean that unless you can prove an animal experiences emotion, it should be assumed they do not.  ...and of course, it is pretty much impossible to prove what emotions another human is really feeling let alone another species.  Professor Quaranta’s two famous doggie happiness papers actually never dare use the words “happy” or “happiness” at all; I presume this is because they would receive too much scientific pillory.  To most non-scientists it seems obvious that animals experience emotion.  Elk run away when faced with a wolf pack, dogs bark and squeak when their dinner is being prepared.  However, the scientific view since Descartes, probably well before, is that these are all simply emotion-free responses conditioned to promote animal survival.  Take “Pavlov’s dog” experiment for example.  The scientific theory is that the dog does not “think” about food when he hears the bell and thus salivate. The theory is that an automatic (thought-free) response is created so that salivation directly results from bell ringing without any thought.  So the concept of happiness, pain, love and hate are all widely excluded from scientific consciousness.  One of the irksome things that Darwin did, apart from implying man was little more than a naked ape, was to suggest that emotions had also evolved.  Even the title of his book “The Expression of the Emotions in Man and Animals” was and still is divergent with the broad swath of scientific thinking.

To me it has always seemed scientifically irrational to believe that animals’ emotions would be all that different to humans.  There is a part of the brain traditionally associated with the expression of emotions (the “limbic system” ...sort of in the “lower-middle” of the brain) which is extremely well conserved between species.  The most substantial differences are in the outer parts of the brain where, generally, the thinking is done.  In terms of animal welfare, shouldn't Occam's razor read “non-animals should be considered to have the same emotions to humans unless proven otherwise”?  I don’t argue that we should not use animals for food or medical research, only that people should cease the mantra that emotions are unique to the human animal.  So the study of dog tail wags and its implicit connection to a state of happiness is progress, bringing an acceptance of animal emotion to a wide audience.  The trouble is, you know what traditionalists will say about dog tail wags now? ....it does not betray subconscious feelings of happiness, but is simply an emotion-free response evolved to convey danger to the rest of the pack and promote survival.


Posted by Dr Richard Barrett-Jolley at 12:37 pm No comments:

I am sure that most sensible scientists, medics and vets would appreciate that ion channels are *the* most important proteins in the body? …OK all proteins are important, but none are as exciting as ion channels, which sit in the membrane of every cell and can control their functions.  …but I think it is about time to bring the word “ion channel” to the attention of archaeologists and historians through the medium of… Richard III’s skeleton.
The official line from University of Leicester (if there can be an official line) is that Ricky 3 had an idiopathic adolescent onset scoliosis.  Now the “scoliosis” bit just means “bent spine”, the “adolescent onset” bit is obvious and “idiopathic” is a posh way of saying “unknown cause”.
Therefore he had a bent spine since adolescence of unknown cause.  He also apparently had osteoarthritis.  It seems likely that a funky ion channel was at fault.  I have in mind, a particular ion channels with a gene name “TRPV4”.  In lay terms, it allows calcium to enter cells in response to movement.  Now what evidence do I have… .  eeerm…. none! That’s the great thing about blogs BUT just check-out the similarity of spine curvature with the bones of King Richard III and this well-studied literature example of a TRPV4 “channelopathy” below.


Not proof, I agree… but perhaps the many fans of Richard III should now start wearing tee-shirts with a TRPV4 channel on them… I present this suggestion below.  Have fun!!! 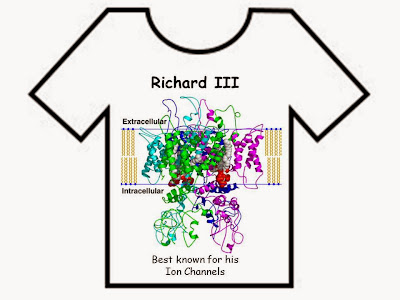 Posted by Dr Richard Barrett-Jolley at 5:25 pm No comments: